Volunteering in a Soup Kitchen 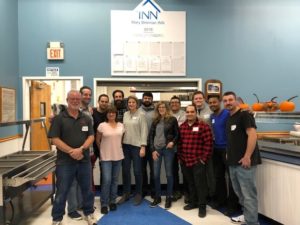 I’ve always wanted to volunteer in a Soup Kitchen.  Between kids, jobs and running Alegna Soap®, I never could find the time.  When I heard the company my husband Brian works for (Vengo) had plans to go last Monday, I decided to tag along.  I consider myself an honorary member of the Vengo staff.  (My son and his business partner used my kitchen table to build machines when they started up.)

We went to the Mary Brennan INN in Hempstead for a 2pm-4:30 shift. We wouldn’t be serving guests, but would be doing the “behind the scene” work the soup kitchen needs done to function. A few of the guys were sent to food pantry to fill orders.  The INN allows guests to pick up brown bag lunches and toiletry items. Another group was sent to organize food on shelves.  Marci, Mary, Brian and I were sent to the Boutique to sort clothes. 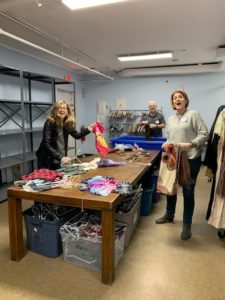 See those shelves behind Marci?  Two hours before I took the picture, they were covered with bags of clothes. The blue bin that’s in front of Brian?  It was overflowing with items. The four of us were able to hang up or fold everything! 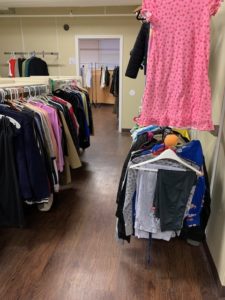 Above is only one room of the Boutique.  Guests are able to come in and get clean clothes for themselves and their children.

The work I did for the Inn wasn’t too difficult, and I went home grateful for the simple things, a roof over my head, clothes on my back and food on my table.  I believe that no one should be hungry so much that I created my own charity, Soap for Soup. So far this year, we’ve raised over $1300 for the St Vincent de Paul center in Bethpage.

What are you grateful for?

The Mary Brennan INN is the largest soup kitchen on Long Island. Monday through Friday, 1,300 hot, nutritious meals are served and 150 guests take hot showers every week. There is a guest choice pantry for free, non-perishable food that is available to guests for weekend needs.

The Mary Brennan INN has a “no questions asked” policy. In addition to the Mary Brennan INN, for more than 30 years The INN has also provided support and assistance to over 25 individual community soup kitchen efforts who have provided over 300,000 meals annually across Long Island. Utilizing The INN’s guidance and support, these individual community soup kitchens have now decided to operate independently of The INN, and some have become their own not-for-profit organizations, thanks to the years of support from their local communities and The INN.

Working at a church in Hempstead, New York, the volunteers discovered that there large numbers of hungry people on Long Island, and The INN was founded in 1983. The volunteers began to form a network of soup kitchens to feed hungry Long Islanders. Soon after the Hempstead soup kitchen began operations, others opened in Long Beach and Central Islip. The INN opened its first emergency shelter in 1984. Helping to  provide nearly 70,000 meals annually to both children and adults, The INN has the support of generous individuals, religious, educational groups, community groups, corporations and foundations who have provided critical funding to help meet the growing needs of poverty-stricken Long Islanders. The INN also receives local, county, state and federal funding.