They were The Mod Squad (“One black, one white, one blonde”), described by one critic as “the hippest and first young undercover cops on TV” 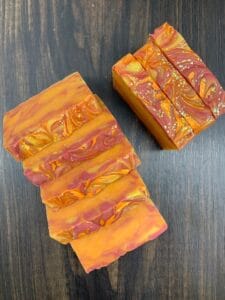 As soon as I made this soap, I named it the Mod Squad Soap. The colors reminded me of the old TV show.  To be one hundred percent honest, I should have waited.  Now I think Orange Sherbet might have been a better name, what do you think?

I made this soap on my February 22nd Facebook Live and cut it on  February 23rd.  Orange, grapefruit and bergamot essential make up the main scent of the soap.  I added a little patchouli to anchor the scent, since those citruses are fleeting. Besides, a soap named after a hippie TV show needs patchouli, don’t you think?

My favorite character on the show was Julie. I think all eleven year old girls wanted to be her. She was the original flower girl. Do you remember how cool her apartment was?  Those beads that separated her bed from the rest of the apartment, I wanted those beads in my bedroom.  I can imagine Julie using this soap in her hip bathroom, while she sings “Natural Woman” in her shower.

This is a triple butter soap, containing shea, mango and cocoa butter, in addition to olive, coconut, and palm oils.  A clean, fresh, citrus aroma. This soap will be ready March 20th. Groovy, right?