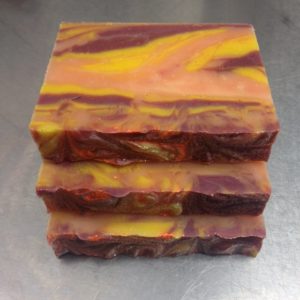 When I started Alegna Soap®, my daughter Elaine and I collaborated on the Laney Line. She likes color in her soaps, so I made four different soap bars for her, and she named them all. She chose the name Piper for this soap. This soap was originally a layered soap, which she thought looked like pipes running through the desert.

I stopped making them a few years ago, Elaine lives in another state with her husband and son, and I no longer felt a connection to them. A few months ago I had an insight. What if the Laney Line grew up like Elaine did? Make the scent blends a little more complex and the color combination more sophisticated? Add some glitter because, why not?

As she heads southwest toward New Mexico, Piper, needing a break, pulls her camper van into a rest stop near the colorful desert cliffs reaching skyward along the side of the road.  Grabbing a cold lemon/ginger kombucha from the cooler, she takes along her hand-carved recorder instrument to play as she sits and enjoys the sunset that is beginning to paint the Nevada sky and the rock walls around her. She begins playing meditatively, but as the brilliant oranges, reds and yellows surround her Piper feels energized and lively, filled with awe at the colors filling the surrounding area.  Her soul feels as if it is on fire, and she stops playing.  Such a small instrument cannot do it justice, and she recalled an undergrad music class that introduced her to the magnificent sounds of the Sunset movement of the Grand Canyon Suite.  Yes, an entire orchestra would be needed to express the image of the sun-bathed landscape around her.  Soul-stirring was the only way she could think to describe it. Color has energy, she thought. The color of nature’s elements, the sky, the sun—it all came together in one great crescendo. And as the brilliant hues began to fade to blue, she climbed back into the van and headed on her way, feeling rejuvenated.

The bright maroon, orange and yellow blend of colors infused with the stimulating scents of patchouli, orange and lavender in Alegna’s Piper soap stir up the senses in an exciting and energizing way.  Feel the brightness, stir your soul.

So what do you think of grown up Piper?

Yours in Gratitude,
Angela