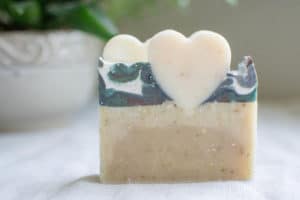 Since I spend a lot of time with my soaps, I think of them as my friends. I give them different personalities and I thought you may like to see them the way I do. Meet Leslie, my Soap for Soup soap.

Leslie stared at the ceiling after opening her eyes in the morning. She had 15 minutes before she had to wake up her two kids to get dressed and ready for school. Her mind should have been relaxed and easing into the day, but since her husband had left her three weeks earlier, she was lucky she slept at all.  Different scenarios played in her head about how to buy food for them all, how to pay the rent and utilities, and cover costs of the doctor for those times her kids were certain to get sick, especially with the winter right around the corner.  She had always watched for sales at the supermarket, but now maybe she should buy the No-Name cereals for breakfast and check the sale bin for discount bread and snacks.

As usual, Jimmy and Lisa didn’t want to leave the warmth of their beds.  Leslie had begun leaving the heat on low at night as a way to lower the payments, and it was tough even for her to throw off the blanket and grab a sweater.  Cereal and waffles were the best she could do for their breakfast.  She called orange juice “liquid gold,” because it was just too much to spend on a drink.  In the past few weeks, she found herself getting to the checkout line and giving things back to  fit within the limited cash she had been able to scrounge together from purses in the closet and the pockets of her pants (and some of the pants her husband left behind). 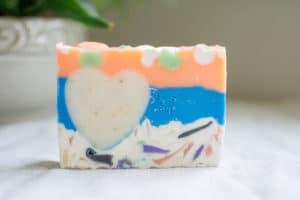 A kind neighbor next door sensed that she might need a helping hand, but wanted to be discrete, so she made extra servings when cooking dinner, and would knock on Leslie’s door and say she had made a huge dinner for her family and had a bunch of leftovers, and did Leslie and her kids like chicken cutlets with sauce and pasta.  Leslie wasn’t sure at first if the extra food was really leftovers or if her neighbor had planned to make too much that night for her sake.  Either way, it was nice to have a hot meal to serve the kids.

When it looked as if her husband was not going to help her out financially anytime soon, Leslie’s anxiety level became more obvious–yelling at the kids when they wasted food or left the lights on.  After the kids were on the bus and heading to school, Leslie scanned the local papers for jobs that were close to home with hours that matched her kids’ school schedule.  Nothing she found paid well.  Luckily, there was an industrial area nearby, and she was offered a receptionist position, but she still juggled to pay the bills.  As long as she could pay the rent and electricity and put gas in her car, she thought, at least they could stay in their rental home and she could get back and forth to work.

The neighbor showed up for the third time with extra food, and at that point Leslie realized she knew what was up. That’s when she opened up and admitted how scared she was about being able to do it all with not enough money coming in, no help from her husband, and two growing kids who were still in grammar school. 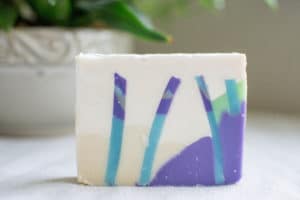 “I know of a place where you can go for help,” her neighbor said.  She had taken the time to call a local charity on Leslie’s behalf to see what they could do for her.   “They told me to tell you to stop in.  I think they can help with some of your bills.”

The next day, Leslie made a call from work to the woman at the charity office.  “Sure, come on in before 6,” she said.  Leslie agreed to go on her lunch hour.

Not only was she treated with respect, she received money to pay her heating bill and was invited to pick out food from their pantry.  Gift cards for the local supermarket were available to new applicants, and she was referred to other sources of help for clothes, gas for her car, and emergency services if she needed them.

Her neighbor was surprised to hear how much the charity was able to do for Leslie, and how well they treated her. She made a point, after that, of donating to them to assist their generous efforts.

Eventually Leslie was able to get child support payments, and the family adjusted to the new schedule, and in time they were able to move into a home with a family member sharing the costs and watching the kids when Leslie was working. 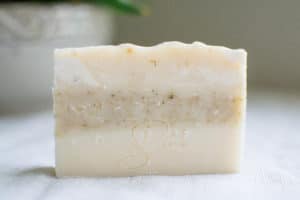 Why Soap for Soup?

At Alegna we created Soap for Soup as a way to support charities like the one that helped Leslie.  Soap for Soup is literally a mixed bag of extra pieces of soap from the production of what is sold in stores and online. The pieces may be a bit shorter and the bags don’t have any one particular type of soap, but each bag of remnants represents samples of the soaps Alegna sells on a regular basis.  The money from Soap for Soup packages helps defray the cost of necessary services that women like Leslie worry about paying for every day.  In this time of giving to others and supporting charities that help those in need, please consider buying some Soap for Soup to have on hand for guests, or travel, or when you suddenly find you’ve run out of your regular favorite soap.

I hope you love Leslie as much as I do.