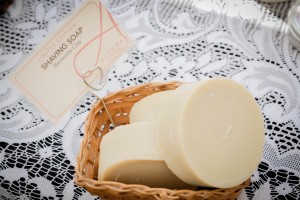 Since I spend a lot of time with my soaps, I think of them as my friends. I give them different personalities and I thought you may like to see them the way I do. Meet Pat, my Shaving soap.

Summer was just around the corner when Patrica and Patrick (both known as “Pat and Pat” to friends and family) began discussing plans for taking the three-week river cruise in Europe they had dreamed about for years.  When it came to deciding what to pack, they had the usual concern for what would be allowed on the plan as well as what items would be environmentally friendly options if they had to dispose of anything.  As occasional campers, they adhered to the idea of “leaving no trace” or having as little impact as possible on the area they were visiting.

They liked to consider themselves to be socially responsible, practical and the kind of people who think of reasonable alternatives to everyday situations.

“We could do shaving cream in a different way,” Patty suggested. After all, back before there were cans that created lather, people used soap and brushes.

“Why don’t we buy shaving soap we can both use,” Patrick said. “It’s in a form we can fly with, and it won’t create trash that we leave behind.”

“Yeah, it feels more natural, too,” Patty agreed. “I mean the soaps can have oils that soothe the skin.”

“I think it is something we could take on our camping trips,” Patrick added.  “Maybe it would spur me on to doing those historical re-enactment gigs at the restoration village—Ye Olde Barber,” he said as he mimed lathering his face with a brush.

They both laughed and it was decided—a bar of shaving soap and no cans would be the way to go.

“Now that I think of it,” Patty said, “we may just want to use it all the time.”

I hope you love Pat as much as I do.