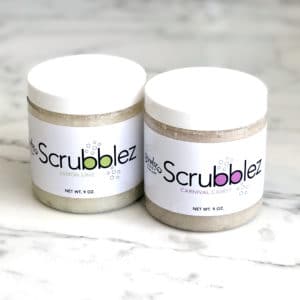 A few months ago, I was making a soap delivery to my friend Roberta at Scrubz. We started talking about emulsified scrubs, and how we both felt they left our hands and body feeling too dry.  After looking up and reading the ingredients on the jar, we decided we could do better, and Scrubblez Soapy Scrub was born.

The idea for Scrubblez bubbled to the surface when a friend of mine who is a chef, mentioned that it was difficult to use her knife after washing with the Handz Hand Scrub. She told me that as much as she loved the way it felt on her hands, she only used it at night, because she needed to be a little bit less moisturized during the day when working with food and utensils.

I had known that our massage therapist used soap and not the Handz when he washed in-between clients. I asked why. He said that because he used oils during the massage itself, he did not want to wash with too many more oils and butters in between. Hmmm.

The next person I asked was my hairdresser. She was so excited when I mentioned what I was working on. She said she always used soap between clients, but hated feeling dry afterwards and didn’t like to put lotion on before she worked on the clients hair. Another hmmm..

Soap, even when produced with the most natural oils and butters, will be less moisturizing than our scrub, and usually a lotion or cream is needed afterwards. Thinking about this Angela and I realized that if we added soap AND extra moisturizing, like Shea Butter, then skin would feel as if they used a soap, but would be hydrated enough they wouldn’t need a lotion. And it would be just enough.

We played around. We made videos of our tweaking the recipe. We created the right balance of soap goodness and Shea butter skin joy.

We think you’ll love it. 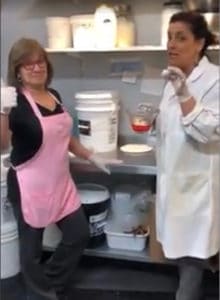 This isn’t the first time I’ve collaborated on a project with Roberta.  The first time was when she wanted soaps in her ScrubzBody scents. I’ve done soap workshops in her store and she recommends me to her customers and friends who are looking for soap.  I love working with her, I think she is one of the few people who talks as fast as I do.  🙂  We always have a great time together, when we can stop laughing. I’m grateful to call her a friend.