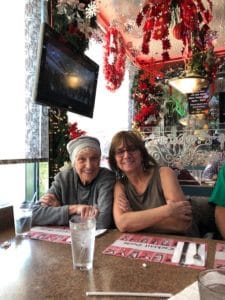 Mom and I were talking and I noticed she had a CSB catalog. It was October and I was already thinking about Christmas gifts.  I never knew what to get my parents, so when she told me how much she liked their fruitcake, I told her I’d get one for her.

“No” mom said.  “They are too expensive.”  We went back and forth a few times, and I left feeling frustrated that I had been forbidden to get her the fruitcake.

At work the next day I couldn’t stop thinking about it.  Here was something she wanted, and she’d be pissed if I bought it.  I had a brilliant idea.  I picked up the phone and the convo went something like this.

Me- Mom what was the name of the company that has the fruitcake you like? (I knew what it was, I was setting up The Big Fruitcake Lie. The set up is important if you want it to be believable)

Mom- I told you not to get it for me! (in a rather loud and annoyed voice)

Me- I’m not going to. (Here comes the Big Fruitcake Lie) I was telling my boss you won’t let me get it and he told me his uncle sends him a fruitcake every year for Thanksgiving from a Collinsport Bakery or something like that.  (I purposely didn’t get the name right, makes it more believable.) They don’t like it and throw it away. He said if you like it he’d give it to me…

Mom- (She cuts me off) Collins Street Bakery?  That’s the one!  They throw it away?  Do they know how good it is?

Me- I have no idea, but if you want it, he said when it comes, he’ll bring it into work.

Mom- Yes, I’d love it. Please thank him for me.

So I went back to my desk and ordered the largest fruitcake they made. I did this every year. And every year she wrote my boss a thank you, gave it to me, and I threw it away.  She never knew The Big Fruitcake Lie.

Mom would cut the fruitcake up into 8 pieces, and wrap and freeze 7 of them. This way, she could have it all year long, since “my boss’s uncle” sent him a large one. Every year, she’d look up the price and tell me what it was. I’d laugh inside because I knew exactly how much it was.

A few years later, at my dad’s wake, I saw my boss walk in.  My stomach dropped even more than it already had, and I practically run to him before he goes to mom.  “Steve, every year you give me a fruitcake your uncle sends because you don’t like them”  Steve looks at me like I’ve lost my mind. We’re walking closer to mom. “What are you talking about?”  “I’ll explain later, just follow my lead”

Mom sees Steve and he says how sorry he is about dad.  Mom says thank you and then proceeds to thank him for all the fruitcakes he gave me over the years.  Steve smiles and says it was his pleasure and he was glad she liked them. Later, when I go back to work I tell him the story and that I’m going to hell for The Big Fruitcake Lie.  Crisis averted.

A few years later I decided to retire from my day job to do Alegna Soap® full time. After mom congratulates me, she says “I guess that’s the end of the fruitcake.”  I told her Steve said if I came by to pick it up he’d save it for me.

I got mom the fruitcake last year.  She died on Christmas Eve, and didn’t have much of an appetite the last few months of her life, but there were a few slices missing.  When we cleaned out the freezer we found the 7 cut up pieces. My sisters and I shared them.

This year I bought a small fruitcake.  We’ll have it Thanksgiving and Christmas.  I’ll bring a piece to the cemetery and leave it at my parents headstone for the birds to enjoy. She’d probably say I wasted my money, but I like to think she sees the humor in The Big Fruitcake Lie now.