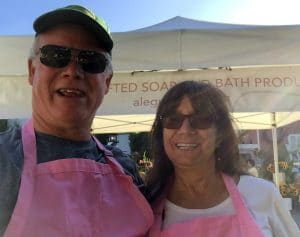 This is about a manly soap. Or my man’s soap. Really, it’s about how I tricked my husband into trying my soap because he said I made girly soap, but that was too long a title for this blog post.

I’d been making soap for 10 years when I decided to start Alegna Soap®. I had everything in place and was ready, but I couldn’t get Brian to even try my soap.  His reason?  I made “girly” soaps.  He was a man and needed a “manly” soap. A deodorant soap, something strong to wash the sweat off him. What he used made his skin red and dry and flaky and itchy. And what he used was ruining his skin.

We have a system in my house.  There is a grocery list on the refrigerator.  When you take the last item out of the pantry, you write it on the grocery list.  This way, when I go shopping, I know what we need.  Brian would write “Iri$h $pring soap (I can’t even type the name. I’ll call it detergent) on the list and I would complain and buy it.

One day, as I was in the grocery store reaching for his detergent, I had a light bulb moment. What if I didn’t buy him what he wanted and we ran out?  He’d be forced to use my soap. (Sneaky little something, aren’t I?)

One morning it happened.  He ran out of his detergent.  He was wickedly pissed. I mean loud yelling wickedly pissed. He knew I did this on purpose. My system worked well and I rarely ran out of anything.  He literally stomped into the bathroom to shower with my soap and slammed the door.

I seriously wasn’t concerned, but even I wasn’t ready for the man who came out of my bathroom. I believe his exact words were “Holy $hit Ang, this stuff is awesome! My skin feels clean but not dry!” It took everything I had in me not to say “I told you so”.

A few years later I developed a soap specifically for Brian and his “manly” skin needs. The soap is called Brian’s Soap (I know, how original).  Brian’s soap has base oils of olive, coconut, palm, shea butter, argan, jojoba, avocado and camellia and additives of honey, oatmeal and goat milk. It’s an unscented soap, because that’s how Brian likes it.

Brian asked me to tell you he’s grateful I tricked him, and his skin has never felt better.